is a PhD on the poetry of Jayanta Mahapatra and a poet. He has four books of poems; four books of translation of Oriya stories and poems into English, and a critical work titled 'Silent Tongues: Writings in Contemporary Indian Poetry' to his credit.

has worked in leading banks and media companies for over 15 years. In parallel s...

best known as an English poet, has been writing in Oriya for more than two decad... 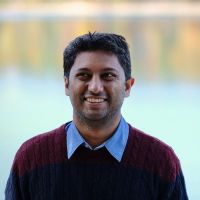 is a freelance multimedia journalist based in Bengaluru