The river Ganga is both a conceptual and a real figure, occupying a space that is epic and monumental in Indian imagination. It is worshipped as a goddess by millions, but it is also one of the most polluted rivers in which untreated sewage and toxic industrial effluents are dumped along its 2,400 km journey from the Himalayas to the Bay of Bengal.

The Ganga receives 220 million gallons of raw untreated sewage every day, and effluents from more than 1,000 industries. The cities and villages along its course dispose garbage into it, and treat the holy river as a sewer. Despite the government’s efforts to clean up with an investment of more than ₹2,700 crore on the Ganga Action Plans I and II in the last three decades, and about ₹3,000 crore in the last two years, a recent report by the Central Pollution Control Board (CPCB) blames the dams and blocks placed on the river at many places, reducing the water’s flow. The report has shown that not only has the clean-up mission failed, but that the water in the river has also gotten filthier.

The first part of my project is Manikarnika Ghat in Varanasi, an important cremation site for Hindus. Charred by hundreds of pyres daily, this is a landscape contaminated with coal, ash and partially burnt human flesh. The other part of my project is a study of the toxic chromium released by the tanneries in Kanpur, which finds its way into farms, food, animals, people and finally into the Ganga.

They not only represent the materiality of the photograph, but also reflect the erasures and eruptions on the tactile relationship between the river and the people who interact with it. They are marked by signs and traces where the river is both present and in the process of disappearing. These ruptures are metaphors for the fragility and ephemerality of the river, which despite the weight of its deposits and residues is forever in a flux.

(This work was recipient of the 2016 India Habitat Centre Photosphere award.) 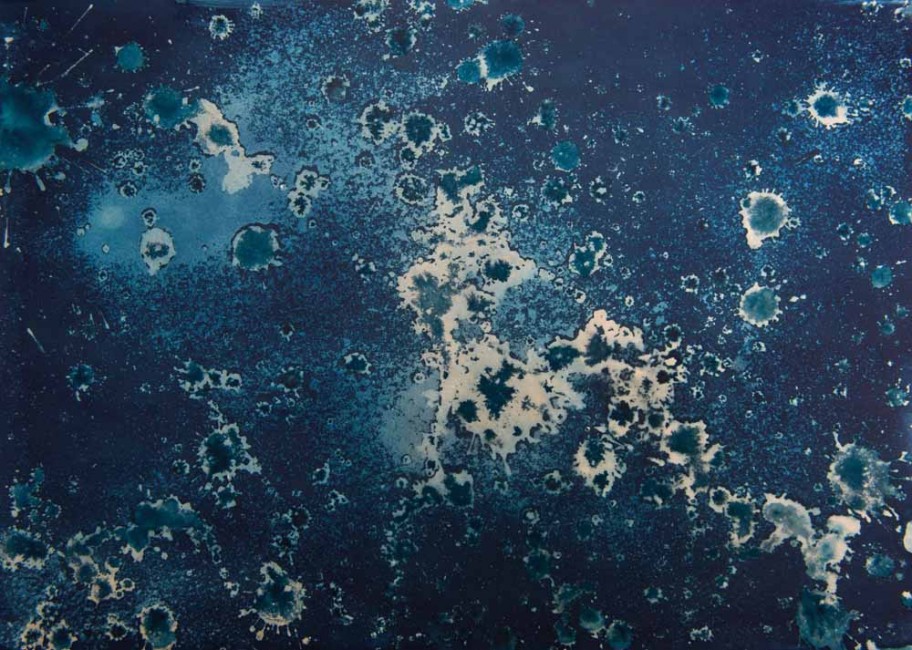 Cyanograms made with human bones, ash and coal from the remains of pyres, and contaminated water collected at the Manikarnika Ghat. Nearly 18,000 tonnes of wood is used for cremation between here and the Harishchandra Ghat, generating 10,000 tonnes of ash to burn more than 30,000 bodies annually. Cyanotype print on paper, soil. 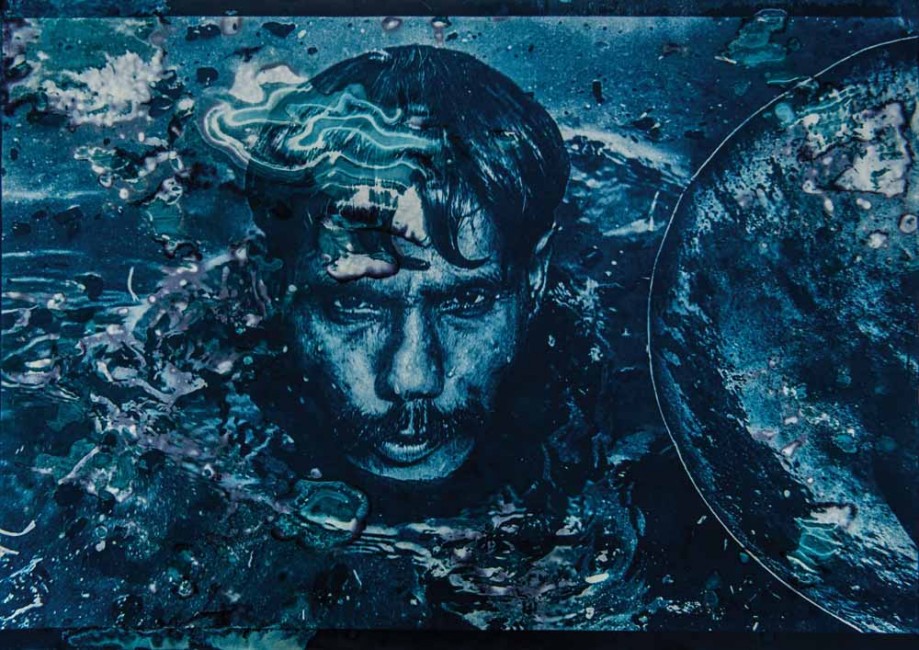 A spaner at Manikarnika Ghat scavenges for coins and pieces of molten gold and silver in the river. Officials admit that the water of the Ganga at Varanasi where millions take a dip, is unfit for bathing. Water becomes unfit for bathing if the biochemical oxygen demand or BOD level (which indicates the health of the aquatic environment) exceeds 3 mg per litre. The faecal contamination is more than 150 times the recommended safe level for bathing. 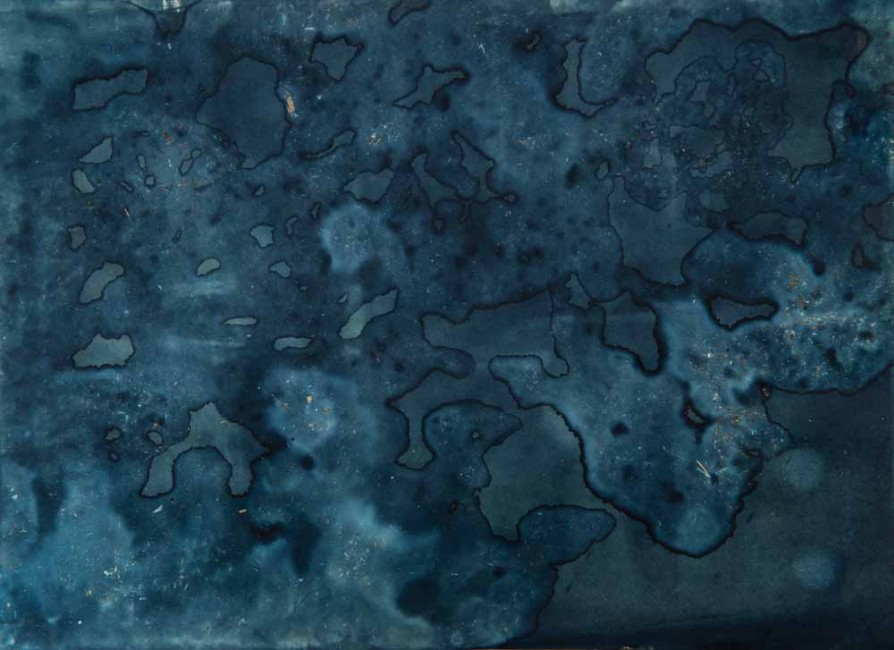 Cyanotype prints made with foam generated by the a drain pouring effluents into the Ganga from Nagwa Nallah near Assi Ghat in Varanasi. About 84 per cent of Varanasi does not have a sewage system. The untreated sewage is dumped directly into the river. Cyanotype print on paper. 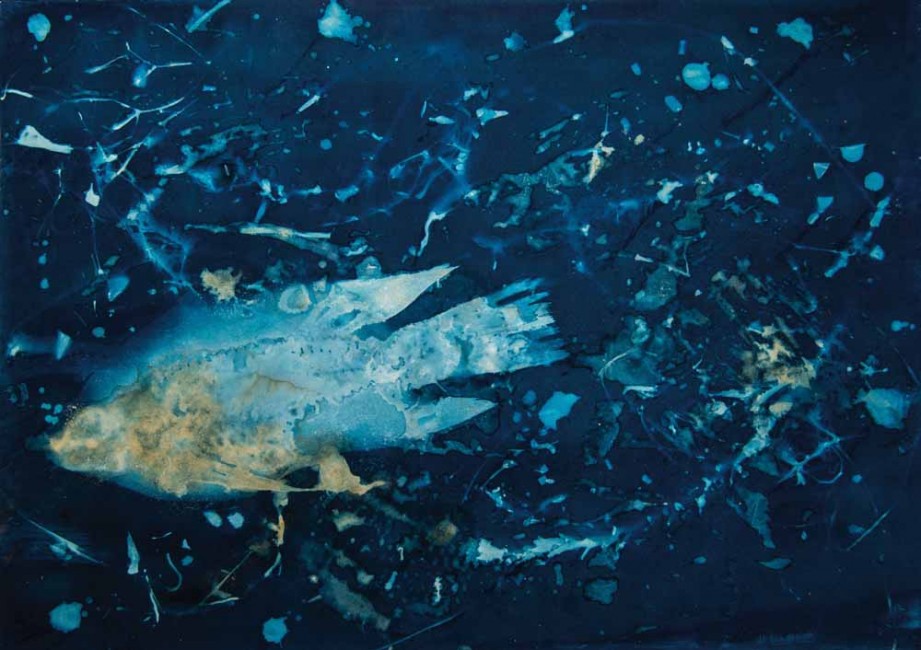 Cyanograms made with a dead fish found in the river, fish tail found in a trash can, and contaminated water collected at the Rajendra Prasad Ghat. High biochemical oxygen demand (BOD) takes a toll on the aquatic life in the Ganga. During festivals, idols painted with toxic chemicals are immersed into the river leading to further pollution. Idol immersion in the Ganga was banned in 2015 which has partially helped to control pollution during festivals. 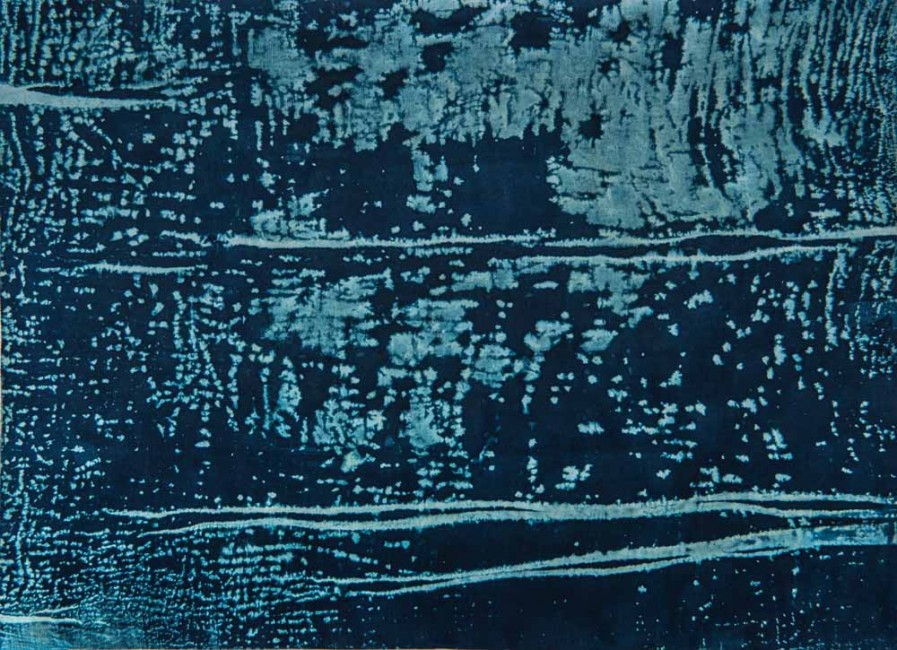 Cyanograms made with Markin cloth (a cotton shroud used to wrap the dead body) and contaminated water at Manikarnika Ghat. Cyanotype print on paper. 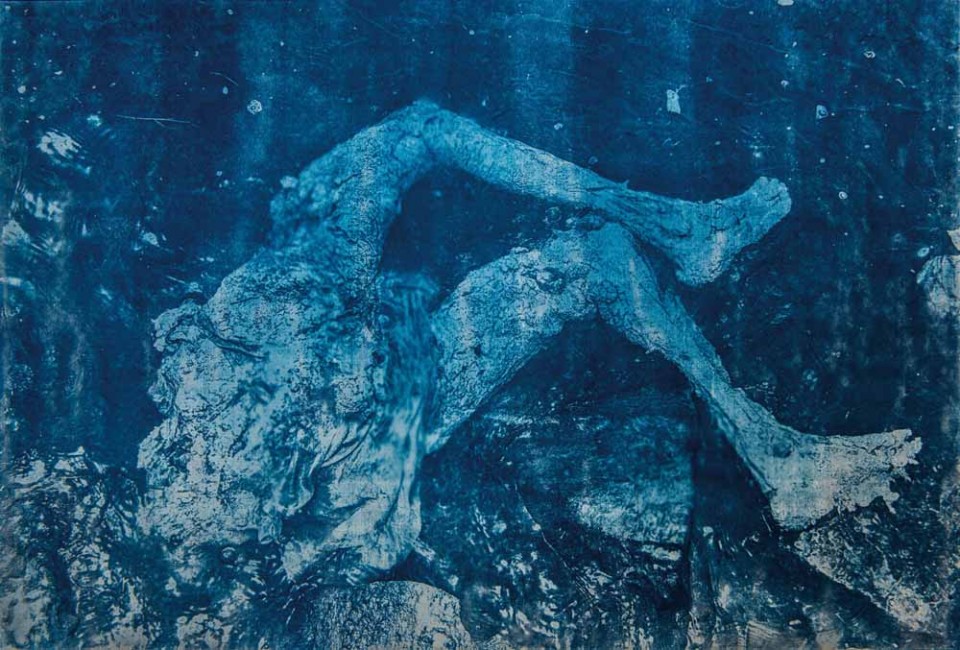 Unregulated disposal of at least 3,000 bodies every year into the Ganga poses a serious health risk. Poor families who cannot afford to buy enough firewood for the cremation immerse half burnt bodies into the river. According to Hindu traditions, it is forbidden to cremate the bodies of pregnant women, children, sadhus and snake-bite victims. These are disposed of in the river. Cyanotype print on paper.

During the last part of a cremation rite, a pot of Ganga water is dropped on the pyre and the mourner leaves the site without looking back. A traditional cremation involving a pyre is preferred to an electric crematorium which was built near Harishchandra Ghat. Cyanotype Print on paper, triptych, ash, coal, and bones. 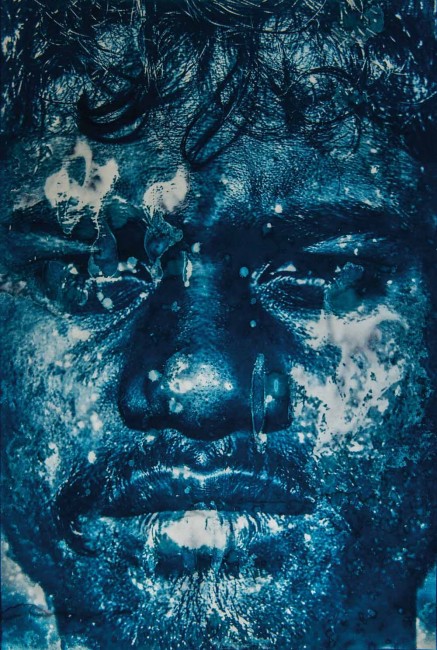 Portrait of a dom at Manikarnika Ghat. A cremation cannot take place without a dom’s blessing, but these cremators of the dead are social outcasts. Doms typically work round the clock, for four days at a stretch. Extreme working conditions condemn many of them to alcoholism. Cyanotype print on paper. 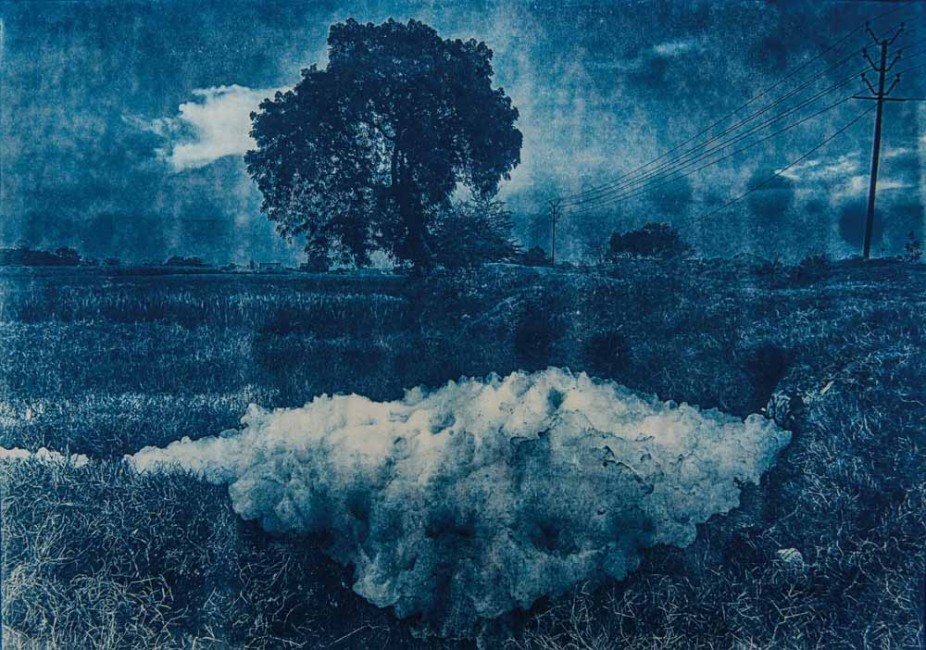 Toxic foam accumulates in an irrigation canal fed by a tannery effluents treatment plant in the fields of Motipur in Kanpur. The water is blackish, laced with chromium and tannery acids that have entered the food chain. Cyanotype print on paper. 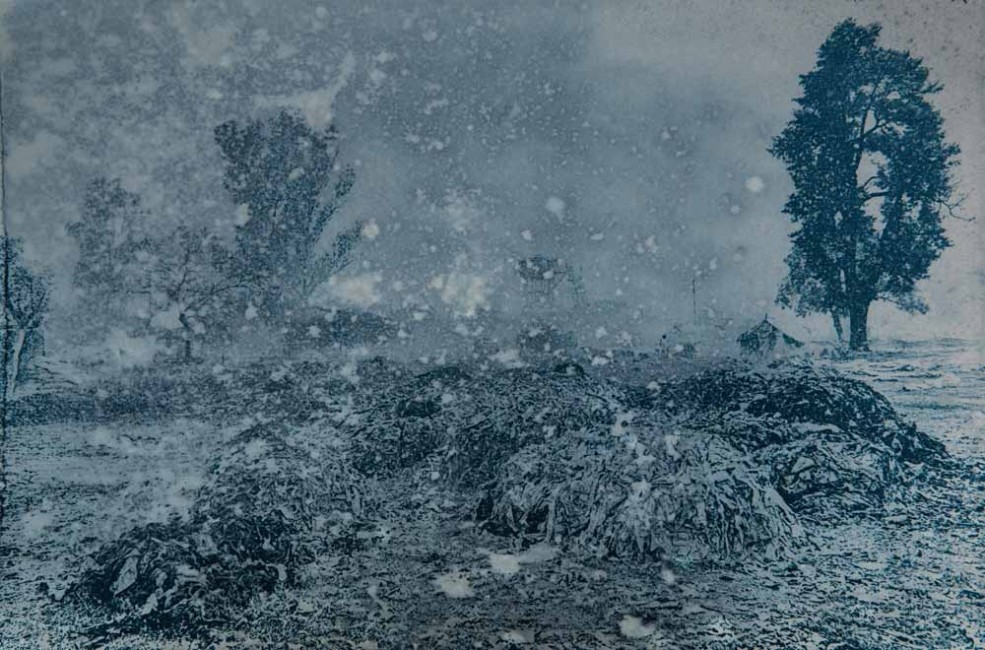 Chromium-treated leather refuse dumps in Jajmau, Kanpur. The soil and the water table is contaminated, which has led to a serious health crisis in the villages around Jajmau. Cyanotype print on paper, bleached with chromium. 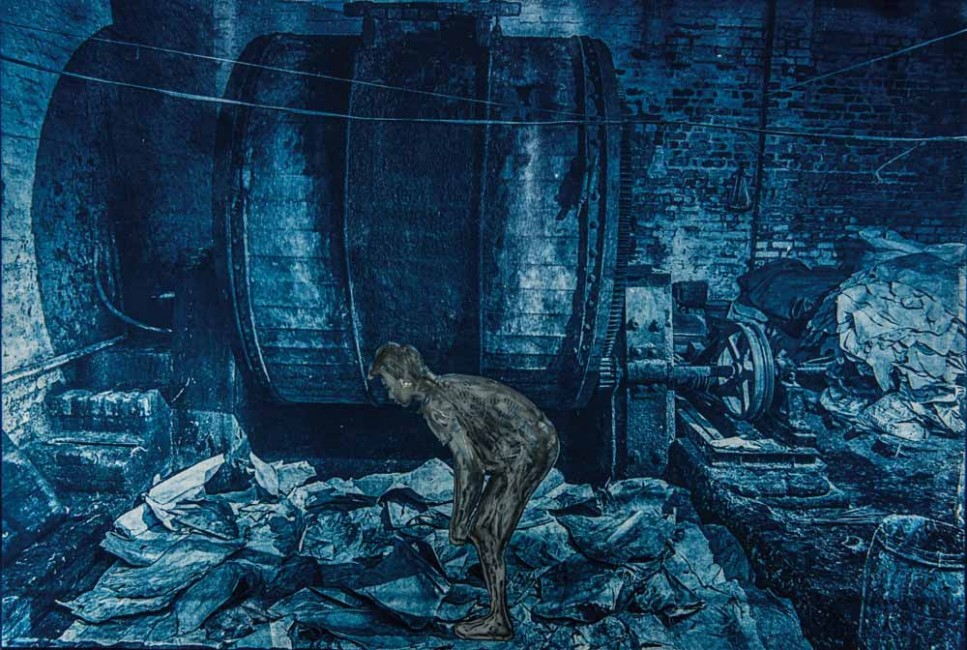 A boy sorts leather pieces to soften them with toxic chemicals inside a tannery in Jajmau. Kanpur is one of the most polluted cities in India and has been the hub for leather production since the British established tanneries here in the 19th century. There are more than 400 tanneries in Kanpur, half of which are illegal. Cyanotype print on paper, painted with chromium sludge. 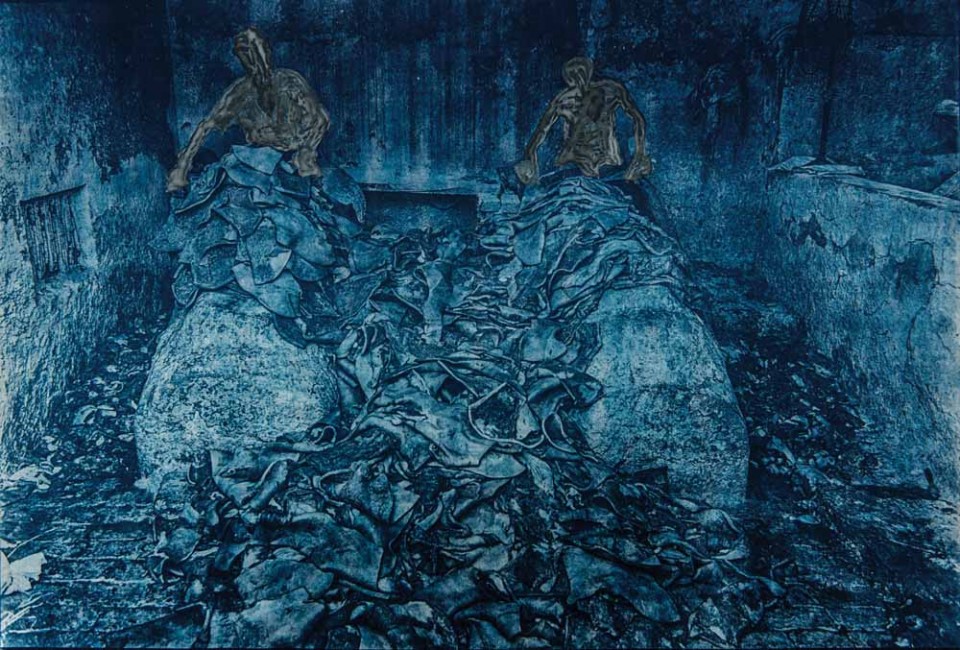 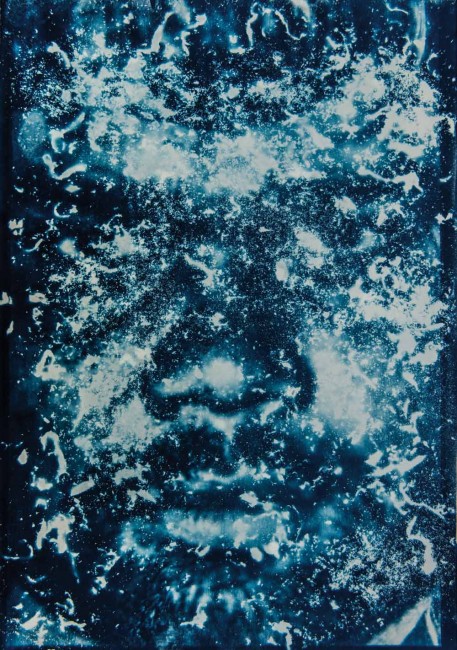 Next spread (right): Portrait of a tannery worker in Jajmau. Cyanograms made using discarded leather strips and leather dust which are treated with chromium compounds, a highly toxic carcinogen. Cyanotype print on paper. 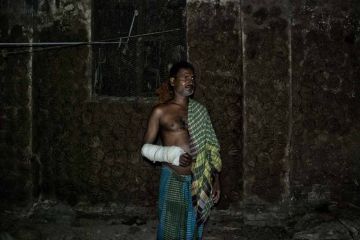 Ghosts of the mills 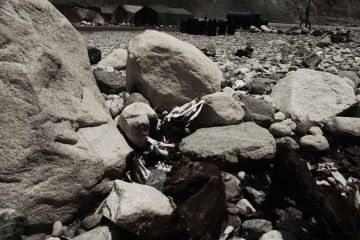 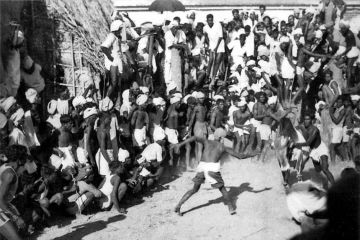