The art of weaving in Kashmir was introduced in the latter part of the 15th century by the king Zain-ul-Abidin, who had imported it from Persia. In the Central and South Asian region Persia had a reputation as the land of high art. Kashmiri carpets and shawls still follow the tradition of intricate geometric and calligraphic motifs and its beauty lies in the detailed needlework. The art flourished in the time of the Mughals and the tradition continued even during the troubled times of the Afghan and Sikh rule. The British came here in the early part of the 19th century and a certain utilitarianism crept into the art that commercialised the woven products and Kashmiri carpets and shawls became the cynosure of the connoisseur all over the world.

The industry suffered a setback when the valley was engulfed in turmoil from 1989 onwards. As the Indian state and local as well as Pakistan-supported separatist forces were locked in a brutal and long-drawn conflict, the ancient craft of weaving faced troubled times as orders dried up with inbound tourism hitting an all-time low. In addition, a lot of artisans fled the valley creating a void. Two-and-a half decades later, the lives of ordinary Kashmiris are threatened yet again. With violence escalating, dreams of rebuilding the craft is fading.

There are other problems as well. The cost of pashmina wool is prohibitive but, most importantly, the young generation is entirely uninterested in mastering the skill. Still, the thing that threatens this beautiful craft is revival of the turmoil that in the 1990s made Kashmir one of the deadliest zones on earth. The people of the valley fear that this centuries-old craft may soon be a relic of the past. 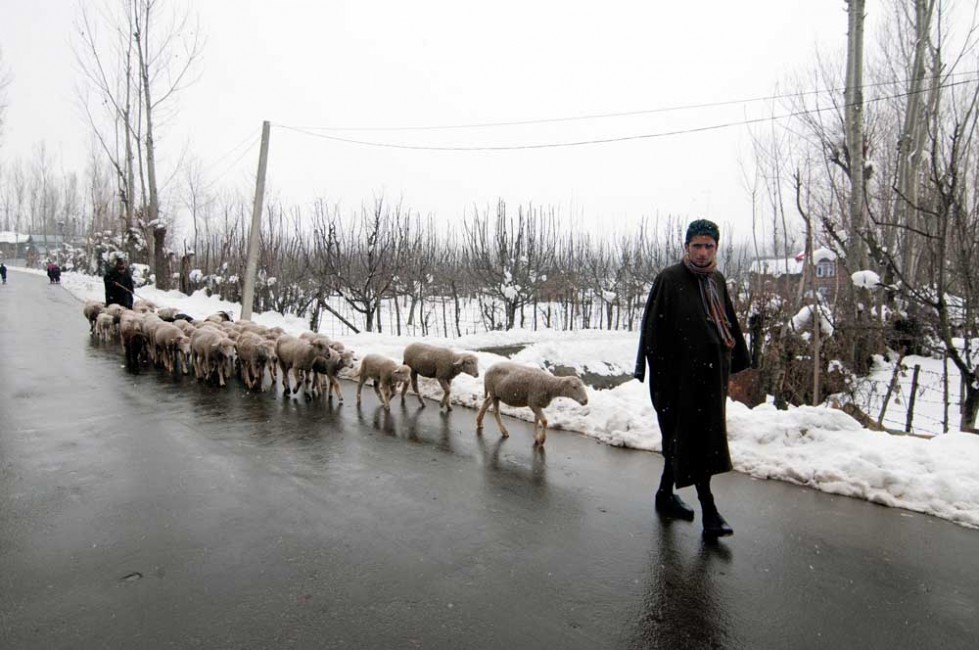 A herdsman with his flock of sheep coming down to the plains at the onset of winter. 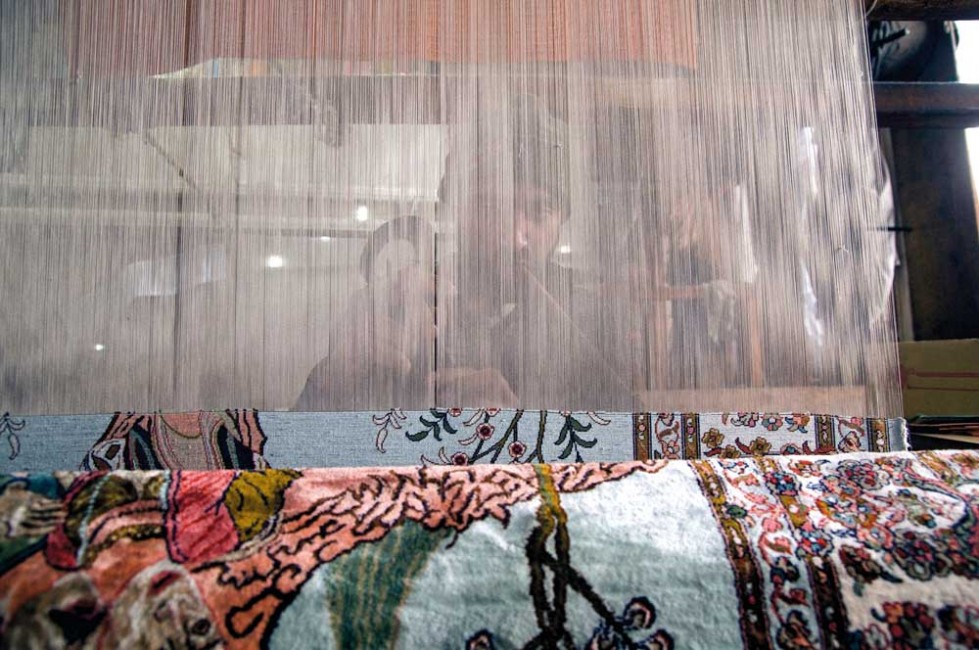 Rolled-up carpets at a shop wait for the discerning eye, which is less frequent as tourist numbers decline. 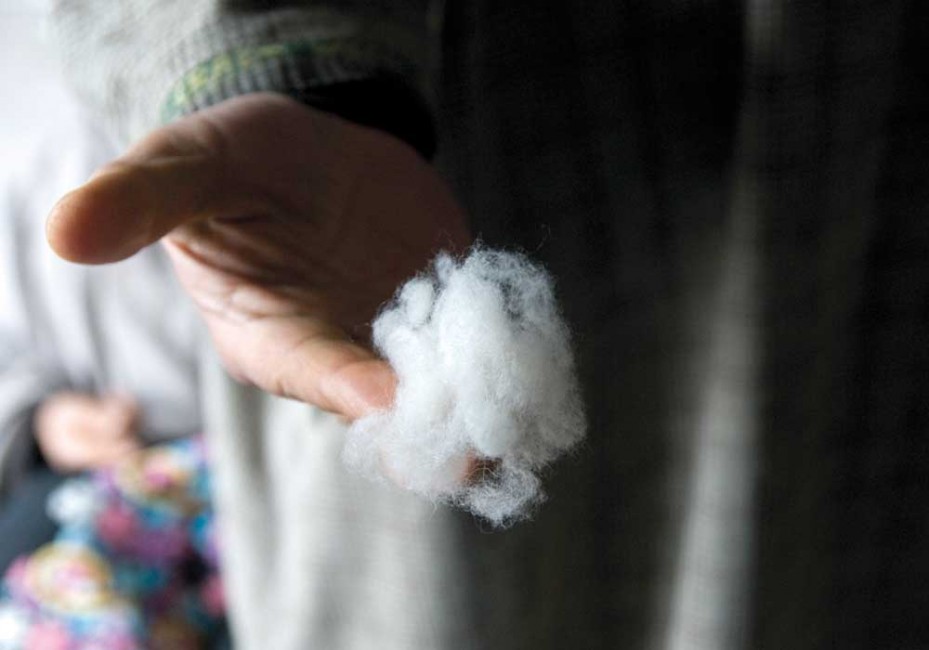 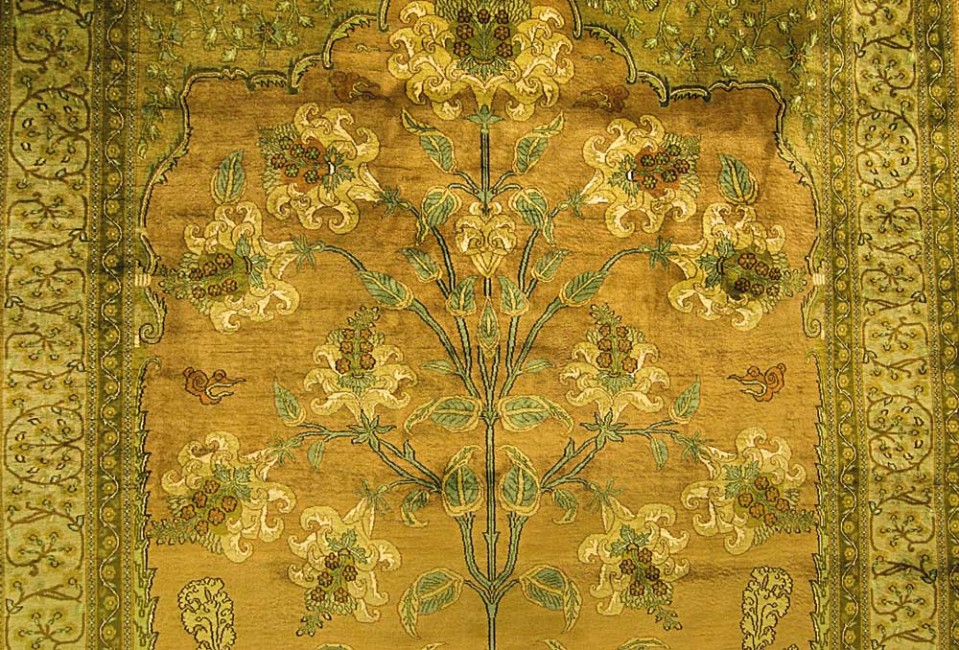 A carpet on display. Kashmiri carpets and shawls still follow the tradition of intricate geometric and calligraphic motifs, a Persian legacy imported nearly five centuries ago. 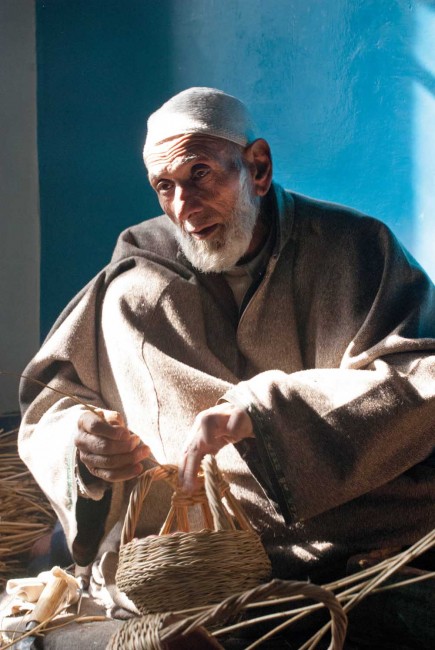 Mohammed Sultan is in his seventies and an ustad. He is pessimistic about the future. He fears the craft may be gone in the next 25 years. 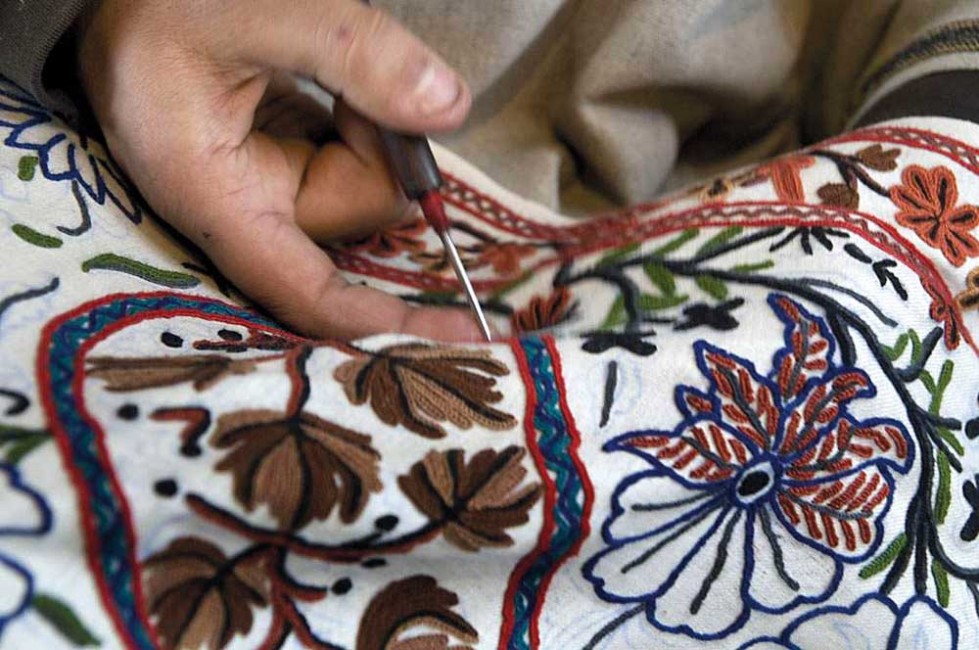 The beauty of Kashmiri weaving is in its needlework, a craft that requires years to master. 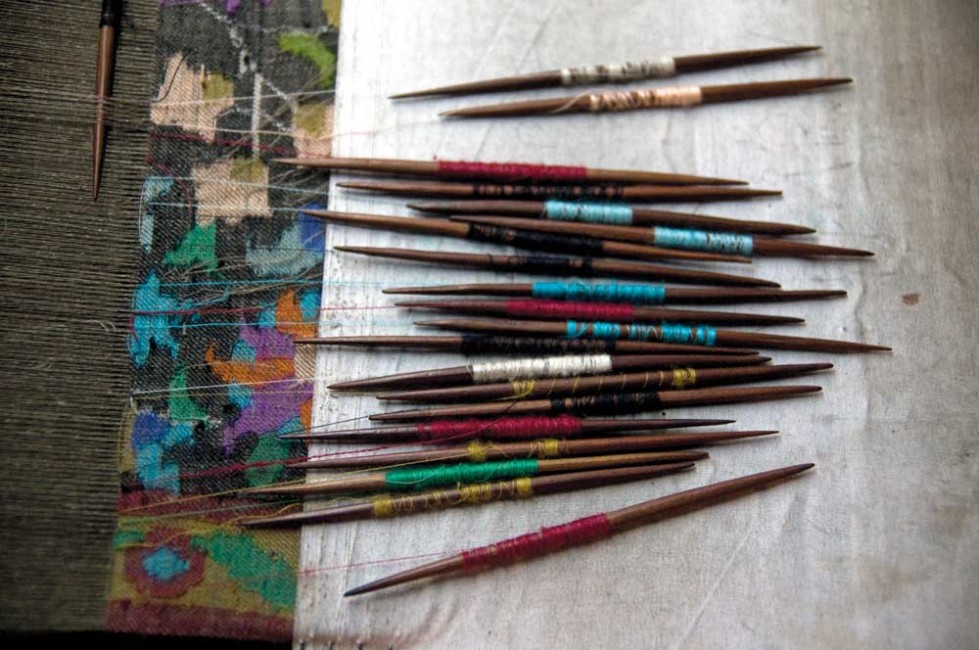 Special wooden needles called Kani in Kashmiri are used to make Kani shawls in a highly specialised weaving technique. It takes a year or two to make one shawl. There are a handful of Kani artisans left in the valley. 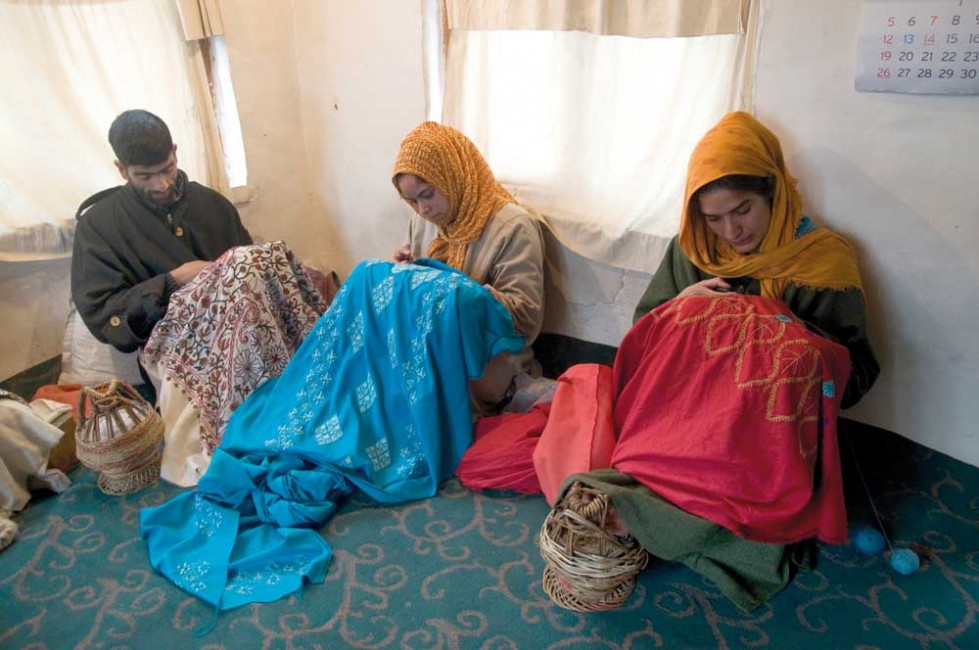 Artisans at work on a kani shawl. Patience and control are indispensable to the job. 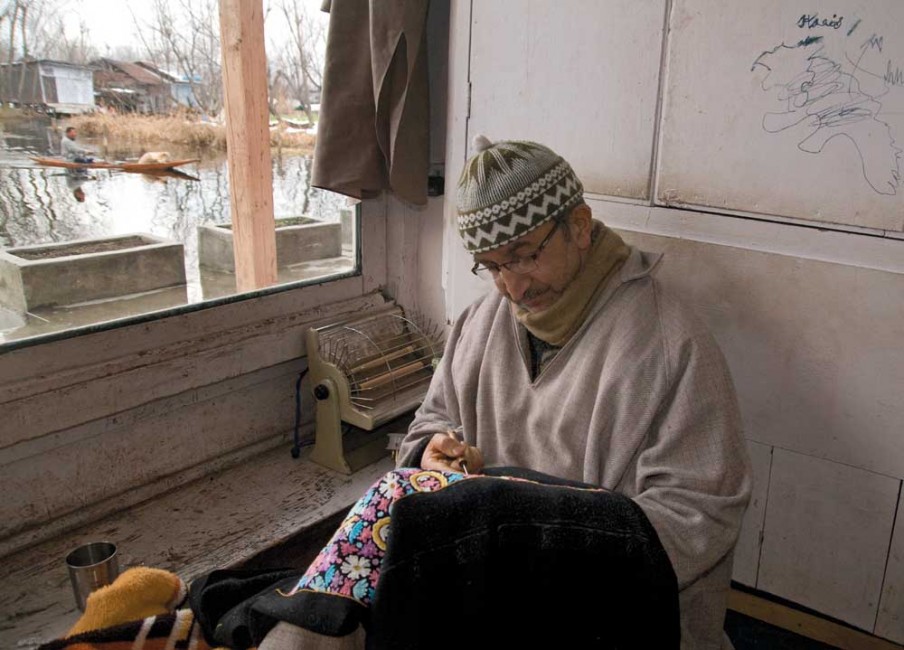 An artisan busy with needlework in his workshop on Dal Lake. 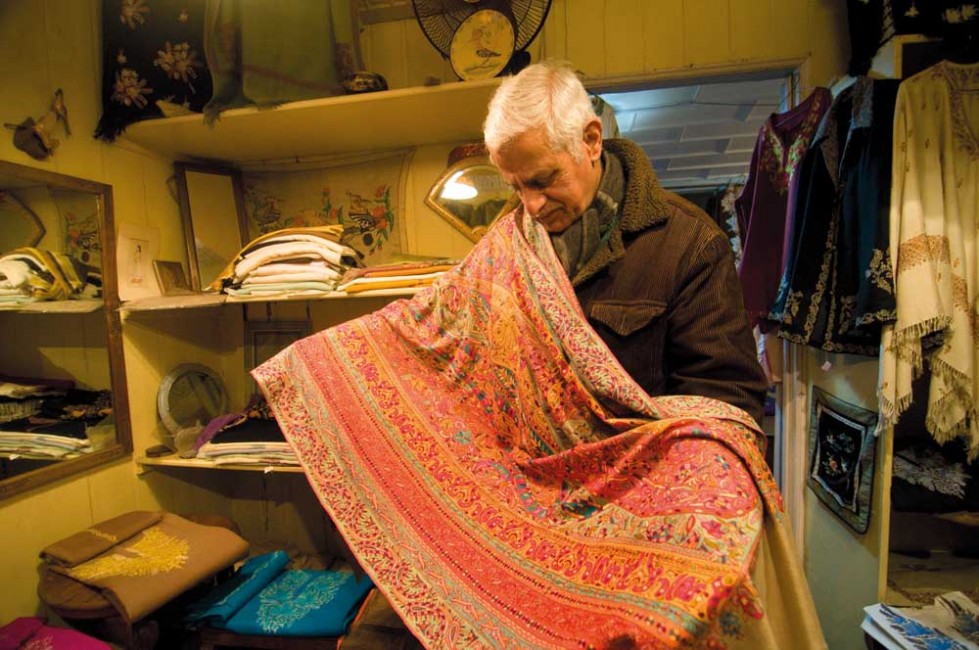 Sadiq Mohammed Wani, who owns one of the oldest handicrafts businesses started by his ancestors in 1840, displays a shawl made 85 years ago. 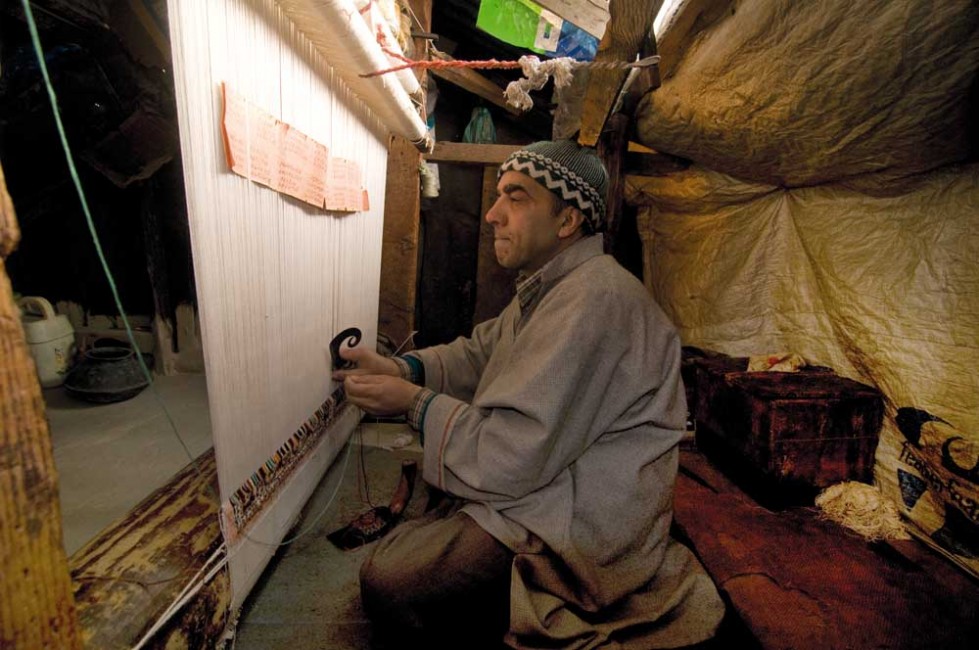 Mushtaq Bhat, a middle-aged weaver is busy behind his wooden loom, a family possession for three generations. He says his  son has no interest in carrying on the family trade. 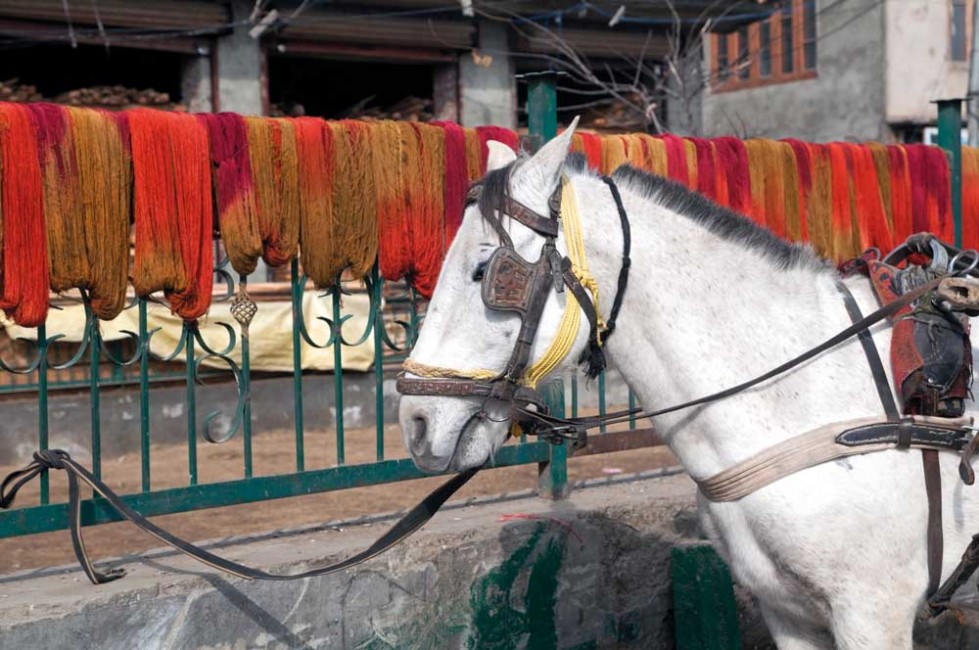 Skeins of brightly coloured yarn hanging over the railings of a house in an old quarter of Srinagar. The old mohallas were traditionally the areas where weavers had lived for generations. 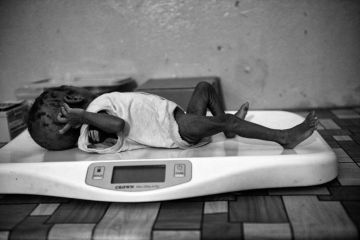